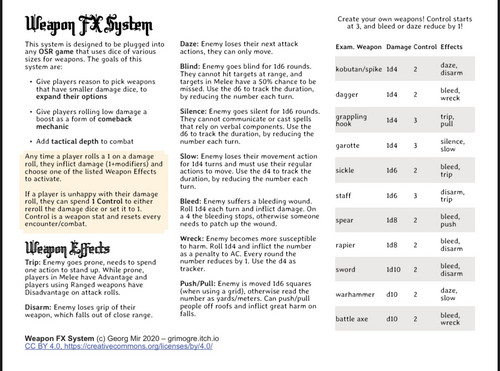 The Weapon FX module can be plugged in into any d20 OSR game, but it also has a standalone component that I want to talk about. It is a mix of Powered by the Apocalypse on one hand, and some elements from d20 fantasy games.

For dice rolls, 2d6 are used against a set layered difficulty. 7-9 is a partial success, while 10+ is a complete success. Usually a 10+ will upgrade the options of the 7-9 result. Powers are structured similarly to how 4th edition and 13th Age do things. There are At Will, Encounter and Daily powers. Some will include checks against either Fight or Skill, the game’s two attributes. The system also recognizes Advantage and Disadvantage. That means rolling an additional d6 and either picking the highest (Advantage) or lowest (Disadvantage) two dice to calculate your result.

The six classes (playbooks) of the game all come with unique powers (Moves) that you can mix and match. They are grouped into three aspects, each offering an At Will, an Encounter and a Daily power. There will also be an option to acquire powers from other classes.

The heroes of this game are these:

Brute: a frontline fighter that is immensely strong and hard to harm.
Brain: a tactician and scholar that can find vulnerabilities and heal their friends.
Druid: a primal caster that controls the elements and fights with tooth and claw.
Knife: a shadow wielding caster stalking their victims with poisoned knives.
Witch: an occult caster that knows how to fly a broom and brew potions.
Rouge: a witty and very lucky caster that controls the Red and makes friends.

Here you will see an example of powers for the Rouge character:

Dazzling Light • Glow • At Will • Action
You always count as equipped with a Ranged Weapon that deals radiant damage. It deals 1 die (d4 - d10) of radiant damage on a hit, Control 3, blind and daze. Also can be used to light up small rooms with orbs of light (radius 30ft bright light).

Nova • Glow • Encounter • Action
When you explode into a nova of pure light, roll +Fight:
On a 7+ this attack deals 3 dice of radiant damage (d4 - d10) in a 30ft circle around yourself to all targets. It can blind and daze enemies.
On a 10+ you can either deal 5 dice of radiant damage, or increase the radius to 40ft.
On a Miss you mark Experience.

Flame Strike • Glow • Daily • Action
When you call down heavenly fires on a group of enemies, roll +Fight:
On a 7+ you deal 6 dice (d4 - d10) of fire damage on each enemy within a 20ft cube, 0 Control, painful, blind.
On a 10+ you can either deal 9 dice of fire damage, or increase the cube to a 60ft cube.
On a Miss you retain the use of your Daily power.

Smile • Charm • At Will • Passive
You have Advantage on all rolls to positively influence others, as well as all rolls to use Charm skills on others.

Turncoat • Charm • Encounter • Action
When you use your words to turn a hostile creature into an accomplice, roll +Skill:
On a 7+ that creature becomes friendly until the start of your next turn and will protect you with its life.
On a 10+ the power lasts the whole Encounter.
On a miss you retain your Encounter power.

Bless • Luck • At Will • Bonus Action
When you bless someone, they gain Advantage on their next attack roll. This benefit lasts one turn.

Epic Fail • Luck • Encounter • Bonus Action
When you invoke powers of misfortune, enemies who roll have Disadvantage on all attack rolls until the start of your next turn. Enemies who do not roll, have their actions weakened considerably for that time.

Second Chance • Luck • Daily • Free Action
When someone (including yourself) dies, that person survives, dispels all negative conditions and instantly regains half their total hit points.

Include Weapon Effects in OSR Games